VEGAS (March 6, 2022) - The Vegas Junior Golden Knights announced today, March 6, that Jack Edlin has been named the recipient of the 2022 Mark Workman Scholarship.

Edlin, a senior at Faith Lutheran High School, is a four-year member of the Crusader varsity team and has served as captain and assistant captain. He maintains a 3.79 grade-point average while playing hockey, working a part-time job, and volunteering in the community. This fall Edlin also ran for Faith Lutheran's varsity cross country team.

Edlin has excelled after recovering from a serious leg injury during his freshman season, one that required surgery and left him in a wheelchair for the first six weeks of his eight-month recovery. He wrote about overcoming that injury in his essay submitted with his Workman Scholarship application.

"Jack is simply the best teammate, that's the most accurate way to describe him," said Adam Miller, Hockey Director at City National Arena and the head coach of the Faith Lutheran team. "He's well respected and liked in the locker room, and there's good reason for that. He's the hardest working guy on the ice, and he doesn't need to be the one scoring to bring out his passion for the game."

"We are thrilled to be able to recognize Jack with the Mark Workman Scholarship," said Darren Eliot, Vegas Golden Knights Senior Vice President of Hockey Programming and Facility Operations. "He exhibits so many of the positive character traits that we know youth hockey instills in kids - things like passion, teamwork, sportsmanship, and work ethic that will help them succeed in the future."

Edlin will be honored by the Vegas Golden Knights at Sunday's game against the Ottawa Senators at T-Mobile Arena. He and the Crusaders have qualified for the USA Hockey High School National Championships, which will be held March 24-28 in Dallas. He plans to use the scholarship to attend college in 2022-23.

"It's truly an honor to receive this scholarship, knowing Mark Workman's enthusiasm for hockey and reputation as a hard worker," Edlin said. "I try to exhibit those same values. I like to say that if you're going to do something, you ought to do it right. That approach and commitment to hard work is really what I pride myself on."

Mark Workman passed away February 14, 2018, after a short and courageous battle with cancer. He was a passionate hockey man that dedicated his life to the game. In addition to his involvement at the amateur, collegiate, and professional levels, he gave much of his time to youth hockey and to the growth and development of the game. He was proud to represent USA Hockey through his volunteer work at their spring and summer development camps. He loved working with young hockey players, and he cared deeply about their growth and personal development on and off the ice.

ABOUT THE VEGAS GOLDEN KNIGHTS
The Vegas Golden Knights are a National Hockey League franchise owned and operated by Black Knight Sports and Entertainment LLC. The Vegas Golden Knights were established by founding partners William Foley and his family and the Maloof family. For the latest news and information on the Golden Knights visit vegasgoldenknights.com. Fans can follow the team on Facebook, Twitter, Instagram and Snapchat. 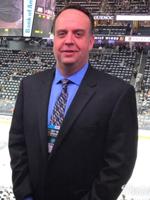 We are currently accepting applications for the Mark Workman Scholarship. For consideration, please apply by Dec. 31, 5 p.m. PST which include the application, an essay, and a letter of reference.

The recipient of this scholarship will be announced by direct email and press release.

All completed applications need to be mailed or dropped off at:

Any questions can be directed to: 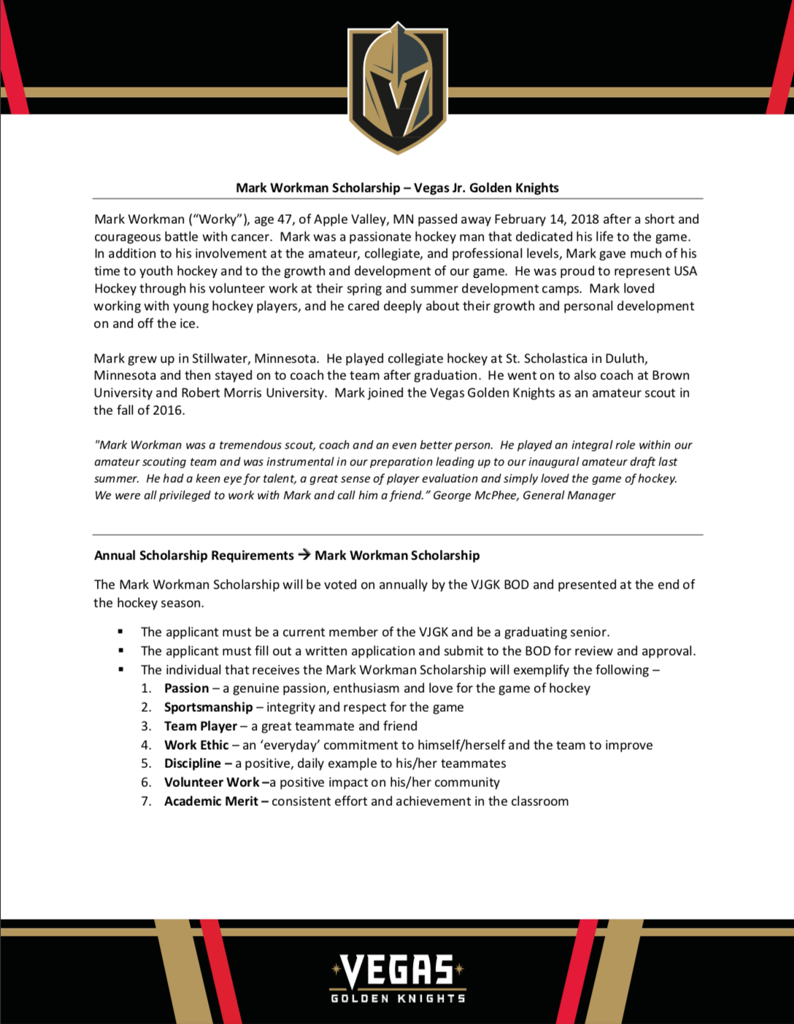